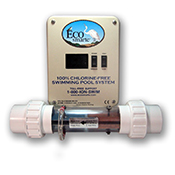 The ECOsmarte spa system creates two powerful sanitizing agents-copper ions and oxygen. This combination of copper ionization and non-chemical oxidation produces clean and clear water not available with other sanitizing systems.As the water returns to the spa through the ECOsmarte copper-oxygen electrode chamber, either copper ions or natural oxygen is released. Both copper ions and oxygen molecules sanitize your spa water by killing bacteria, algae, and viruses. 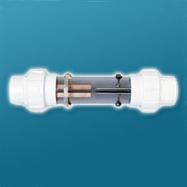 ECOsmarte uses copper ionization technology first developed for the Apollo space program. Copper ions are safe for humans, plants, and animals but lethal to bacteria, algae and certain viruses. Copper ions are only added to the spa for several hours with each fresh water fill and usually last at effective levels until the next draining and refill. This residual sanitizer is recognized by both the National Science Foundation (NSF) and the U.S. Environmental Protection Agency (EPA).

ECOsmarte generates oxygen from the water itself. Oxidation is achieved when water passes through the titanium electrode plate with a low voltage electrical current. This electrolysis separates water (H2O) into free oxygen (O2) and hydroxyl radicals (OH), the most powerful oxidizers (superior to ozone and sodium hypochlorite, the dominant form of chlorine) for water disinfection. These oxidizers are responsible for eliminating body oils, sun tan lotions and dead organic matter, killed by the copper.

Is Copper in the Water Safe for Me?

Absolutely. We run our spas at 25% of the safe drinking water levels according to the EPA. In fact, if you drank 2 gallons of spa water, you would ingest the amount of copper found in a multiple-vitamin.

See the Benefits of an Ecosmarte Spa System